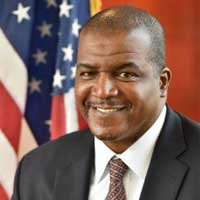 Mr. Ford has more than 30 years of experience with the FBI, where he had oversight of all investigative and administrative matters for most of New Jersey, including five satellite offices as the Special Agent in Charge at the Newark division. He worked closely with other law enforcement agencies in responding to priority threats, oversaw budgets and established strategic planning and crisis preparedness for the federal government during Super Bowl XLVIII in New Jersey. Previously, Mr. Ford had been the Special Agent in Charge, Memphis division, and served several stints at the FBI headquarters, where he oversaw field office and headquarters compliance inspections, and led shooting incident review teams. He has a law degree from Rutgers School of Law and a Bachelor of Science-Criminology from Tennessee State University.